Richard has always loved spending time by the sea. Although he grew up in Hertfordshire his grandparents live on the south coast, in Sussex and Dorset, where much of the inspiration for his stories has been found. Whether writing, sunbathing, or sheltering from the rain with a mug of tea, the family beach hut in Bournemouth has always been one of his happiest places.

Richard’s debut novel, The Peculiar Tale of the Tentacle Boy, won the inaugural Chairman’s Choice prize as part of the Times/Chicken House children’s fiction competition in 2019 and was published in August 2021. His love of storytelling started at a young age, through a passion for literature but also for cinema. Two of his greatest childhood influences were Roald Dahl and Tim Burton, who both possess a wickedly dark sense of humour.

Along with writing, some of Richard’s other interests include wild swimming in seas and rivers, scary movies, West End musicals and 90s pop culture. He is also a massive Eurovision fan, a Disney film nerd and someone who gets far too invested in The Oscars.

Richard has a degree in Film & Literature from the University of Warwick. Before becoming a writer he worked in public relations, for many years at Condé Nast as well as Ralph Lauren and Louis Vuitton. He now works as a freelance publicist, and lives with his partner in London. 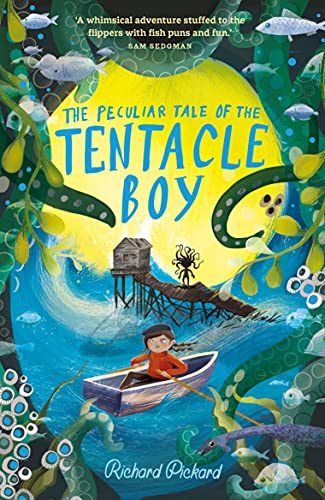