Amy Meek from Kids Against Plastic has written for the Daily Mirror!

​We are thrilled to share the article that, Kid’s Against Plastic’s eco-warrior, Amy Meek wrote for the Mirror’s NextGen feature! 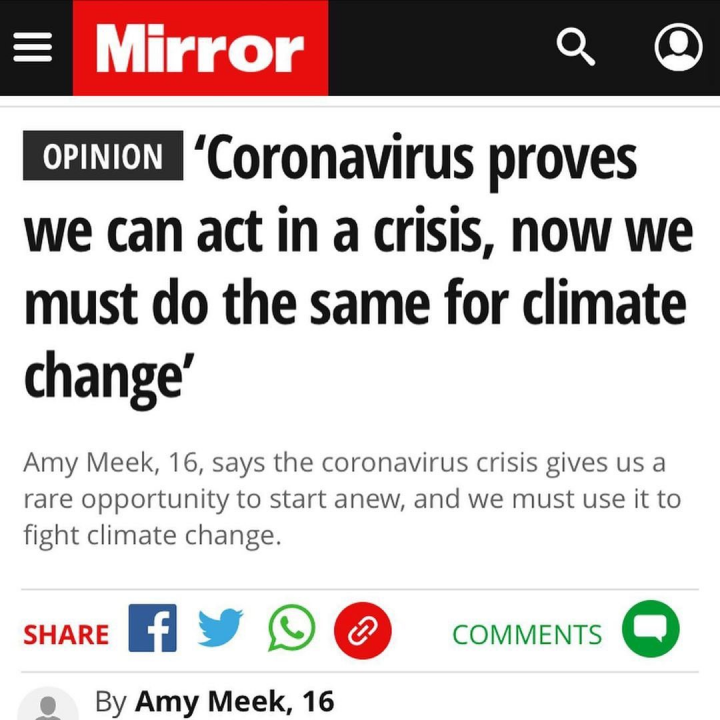 ‘Coronavirus proves we can act in a crisis, now we must do the same for climate change’

A one degree Celsius rise in body temperature could hospitalise a human. A temperature rise of two, three or four degrees could be deadly.

Imagine if this were happening to your relative; if someone you were close to was in hospital with a rapidly rising temperature, you’d be panicking. You’d want to do all you could to save them, wouldn’t you?

Imagine if this were happening to your relative; if someone you were close to was in hospital with a rapidly rising temperature, you’d be panicking. You’d want to do all you could to save them, wouldn’t you?
Our planet is currently sick with a temperature, with a condition that is worsening rapidly. If the Earth’s temperature rises by three or four degrees, the consequences will be catastrophic for humankind.

We could face mass species extinction, intense weather events, and sea level rise that would displace millions of people.

But the sad and scary thing is; this isn’t giving rise to the same level of panic we’d feel if the same were happening to a sick relative.

Globally, we’re not treating the climate emergency like the existential threat it is. And instead of taking timely and tangible measures to combat it, we’re waiting until we hit crisis point before responding.
Lockdown has shown us globally how clear the impact we’re having on the climate is. There’s been significant drops in air pollution in some of the most congested cities around the world, due to large falls in air and land traffic (such as in Delhi, where the smog has disappeared altogether).

For the first time since 1882 (when the first coal power plant was connected), the UK went a full month without coal-powered electricity.

Consequently, carbon emissions this year are set to fall by 4-8%, which is up to ten times larger than the last recession.

But to keep global temperature rise to the 1.5 Celsius limit necessary to prevent more extreme consequences of climate change, scientists say that this fall in carbon emissions would need to be repeated every year until 2050 when net-zero carbon emissions are reached.

Clearly, this cannot be achieved through a global lockdown for years into the future. Instead, we

And we need to use the rare opportunity of a clean slate presented by lockdown and the fall-out of the coronavirus crisis to do this.

Because despite the fact that COVID-19 has had a devastating impact on people from all walks of life around the globe, resulting in the deaths of over 300,000 people, the virus is not a threat to human existence.

The death toll from it is stark and it is a horrific crisis that has caused the premature loss of life of hundreds of thousands of innocent, undeserving people, but it will not ultimately wipe out the human race.

Climate change, on the other hand, is an existential threat to us humans, so we need to hit the brakes urgently.
Leaving lockdown, governments need to invest in the green infrastructure to lessen
carbon emissions, there needs to be a more wide-scale adoption of meat-free diets, and the companies responsible for huge amounts of waste and emissions every year need to be taxed accordingly or made to meet stricter green targets.

We cannot afford to waste the opportunity given to us and put essential global climate action off until a future date. That’s the equivalent of putting the Earth in a hospital bed in the ICU and waiting until it gets to critical condition, death’s door, before finally saying “shall we try a treatment?”.

The coronavirus pandemic has given the world a rare opportunity to start anew, and one that we need to use to take urgent action to combat climate change, for the sake of our future on Earth.

A note from Amy:

But on a more serious note, this article covers something that is really important to me - that leaving the coronavirus lockdown, we need to take urgent measures to address climate change using the clean slate presented by quarantine. For our own sake if nothing else, we cannot afford to waste this opportunity to change given to us. Yet, we already see it happening. Air pollution levels in China are back to pre-COVID levels already, and with lockdowns easing around Europe we’re sure to follow. -

WE CANNOT AFFORD TO LET THIS HAPPEN! In the words of Dr Jane Goodall, humanity will be “finished” if we fail to drastically change our food systems in response to the coronavirus pandemic and the climate crisis.

If you would like to read more from Amy about what you can do to help with climate change, you can order her book, Be Plastic Clever, that she wrote with her sister Ella here! 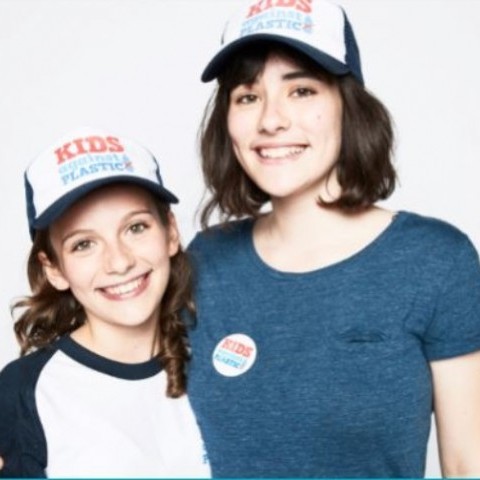 Amy and Ella Meek (15 and 13 years old) founded their campaign and charity, Kids Against Plastic, in 2016 after learning about the UN’s Global…