In Two Minds by Dr Sohom Das has sold to Sphere!

​We are delighted to share that Katie Fulford has sold world rights for In Two Minds: Stories of murder, justice and recovery from a forensic psychiatrist, from Consultant Forensic Psychiatrist, Dr Sohom Das to Nicky Crane, Commissioning Editor at Sphere! The book will publish in hardback, ebook and audio on 10th March 2022.

During his fifteen years as a psychiatry doctor, Dr Sohom Das has assessed, treated and rehabilitated hundreds of patients who the tabloids might call the ‘criminally insane’, many of whom assault, rob, rape, and even kill. He’s worked in high-security prisons, securely locked hospital wards, and in courtrooms as an expert witness, where he advises on not guilty by reasons of insanity or diminished responsibility pleas – to either steer the incapacitated, the vulnerable and voiceless away from a lifetime of incarceration towards recovery, or be instrumental in helping them get away with murder.

IN TWO MINDS is an honest, fascinating and at times humorous insight into a harrowing world. The book traces Dr Das’s time as a psychiatric doctor, and details his most extreme, heartbreaking and bizarre cases, from the tragic story of a teenage girl who smothered her two-year-old nephew in a state of psychosis, to a very rare presentation of ‘folie à deux’, when the delusional beliefs were shared between a psychotic son and his father. Dr Das also describes the time he was punched in the face on his first day as a fledgling psychiatrist – and another occasion in which he was duped by a patient who was fabricating their psychiatric illness.

In his professional memoir, Sohom shares the stories, the patients and the cases that have characterised a career spent helping those most of us would rather forget. However, it’s also filled with moments of hope and recovery. I am constantly in awe of Sohom’s compassion and deep understanding of the human psyche, but he’s also wickedly funny and a gifted storyteller, so I’m delighted to be bringing him to the Sphere list to join other bestselling true crime authors such as David Wilson and Carla Valentine. I can’t wait to publish IN TWO MINDS, and know that true crime fans and anyone interested in the dark side of the mind will absolutely love it.

I’ve always found many of my cases to be surreal, peculiar and fascinating. I relish the opportunity of being able to share some of my patients’ stories. In this book, I aim to reveal what lies behind the huge bolted door and gates that detain my patients. I hope to shed some light on the secretive world I work in, which the public know little about. 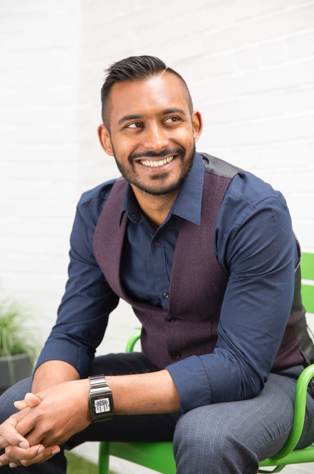 Dr Sohom Das (MBChB, BSc, MSc, MRCPsych) is a Consultant Forensic Psychiatrist who lives and works in London. This niche specialism involves the…