Rabina Khan’s Memoir, My Hair Is Pink Under This Veil, goes to Biteback!

Lauren Gardner has sold World English Rights for politician and campaigner Rabina khan‘s enlightening and engaging memoir, My Hair Is Pink Under This Veil, to Olivia Beattie, Editorial Director at at Biteback Publishing!

Khan came to Britain from Bangladesh when she was three years old and grew up in Rochester, where her father was a docker. The book tells the story of how a Muslim woman reconciles her faith with British culture against a backdrop of blame, bias, ignorance and misogyny, including from her own community. It will challenge outdated views about Muslim women and explore misconceptions regarding Islam, inequality and integration at a time when Britain faces its own issues with radicalisation, extremism and political divisions.

Khan currently serves as a Liberal Democrat councillor in Tower Hamlets and was the first Muslim woman to hold the portfolio for Housing and Regeneration.

A note from Rabina:

I am genuinely excited that Biteback is publishing ‘My Hair Is Pink Under This Veil’ and feel honoured to be working with the BiteBack team. A white man once asked me what colour my hair was under my veil. I smiled and said it was pink. Little did I know that I would go on to write a book about the struggle to dismantle some of the stereotypes that Muslim women face - and perhaps make people laugh with me along the way. I hope that people will enjoy reading the book as much as I enjoyed writing it.

A Note from Olivia Beattie, Editorial Director at Biteback Publishing:

Rabina’s proposal had us all hooked from the very first pages, where she writes with such grace and humour about her family’s experiences building a new life in Britain in the 1970s. Clear-sighted and often deeply affecting about the struggles facing Muslim women both then and now, My Hair Is Pink Under This Veil is at its heart an inspiring story that will speak across the divides of age, race, class and religion about the power of building bridges, and the Biteback team are delighted to be publishing it. 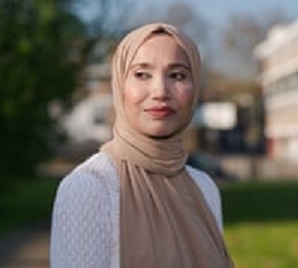 Rabina Khan is one of the most influential politicians in the East London borough of Tower Hamlets, where she serves as a Liberal Democrat…