Dr Amit Patel is a disability rights campaigner, fundraiser, motivational speaker and independent diversity and accessibility consultant. He is registered severely sight impaired (blind) having lost his sight to Keratoconus in 2013. Amit studied medicine at Cambridge University and qualified as a trauma doctor, specialising in emergency medicine and major incidents. During med school, Amit was diagnosed with keratoconus, a condition which changes the shape of your corneas, but which is usually easily treated with a corneal transplant. However, Amit was one of the rare individuals for whom the transplants rejected and despite travelling to the US for (what was at the time) groundbreaking stem cell surgery, Amit lost his sight completely just one year after getting married.

Since then, Amit has been on a journey to learn to live with his sight loss, from learning how to make a cup of tea again to walking using a white cane. Once getting to grips with the basics himself, Amit set out to help others who were new to sight loss, through volunteering with the Royal National Institute for the Blind (RNIB) and Guide Dogs for the Blind. Amit is married to Seema and together they have a two-year-old son.

Kika is a four-year-old white labrador who has been matched to Amit since September 2015. The arrival of Kika turned Amit’s world on its head and has given him not only a new best friend but a new lease of life alongside his newfound confidence.

Together, Amit and Kika travel through London and its surrounds on a daily basis, charting their journeys, challenges and the people they meet on their travels via Kika’s Twitter account, which was started when she and Amit first began their training together. After noticing Kika had become distressed on several occasions but unable to see the cause of it, Amit and his wife Seema came up with the idea of attaching a GoPro to her harness so Seema could review the footage and see what the problems were.

Sharing the footage on Twitter, Amit and Kika’s daily adventures quickly hit the news after one of their videos showing a journey on a tube escalator went viral. Since then, the #TheKikaEffect has grown worldwide and they use to power of social media to provide a dog’s eye view on their travels, being at once illuminating, educational, heartwarming and entertaining.

Amit and Kika’s first non-fiction book, Kika and Me, was published by Pan Macmillan in Feburary 2020.

Praise for Kika and Me:

‘An incredible story of courage, perseverance and, ultimately love’ - Sun

‘The most moving book of the year’ - The Lady

BlindDad_Uk
9:37 AM, Jul 2nd (IST)
I should add, this was a few hours into our journey and the lady of course asked me in advance if she could give @Kika_GuideDog a fuss 💙
Reply Retweet Favorite 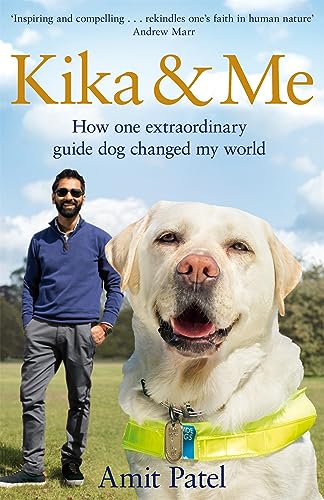