Mr Bingo loves post. In April 2011 he launched a service on his website, where, for a small payment, he would send his customer a vintage postcard with one of his iconic drawings and an offensive message on the back. So the purchaser gets a much sought-after original signed drawing, the postman gets a laugh and the world gets a little bit happier.

Six days after launch, it had become so popular that Mr Bingo had to temporarily close the service. But fear not! He has teamed up with Penguin to create Hate Mail, a book that showcases 100 of his favourite postcards.

Mr Bingo didn’t learn a lot at school but he did discover one valuable thing: he was good at making people laugh. Now an enormously successful illustrator based in East London, he is “drawing stuff” for the likes of The Mighty Boosh, QI, The Guardian, MTV and The New York Times. As well as making pictures, Mr Bingo regularly speaks at events on his favourite topics, such as religion, the internet, dating, animals, art and terrorism. 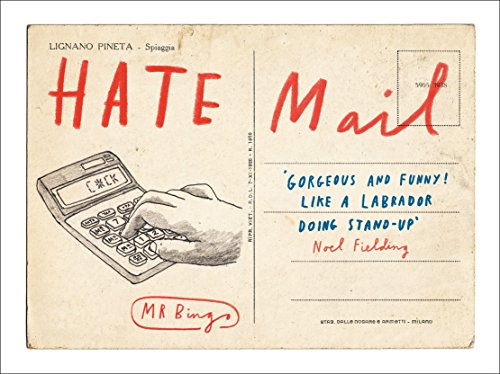