Rabina Khan is one of the most influential politicians in the East London borough of Tower Hamlets, where she serves as a Liberal Democrat councillor, and ran a close second in her bid to be Mayor. Born in Bangladesh, and raised in Rochester, she is known for her passionate support of causes such as stopping youth knife crime and building more social housing.

Rabina was the first Muslim woman to hold the portfolio for Housing and Regeneration (2010 to 2015) and was central to the creation of 4500+ new homes in the borough. Under her tenure key regeneration projects won both the Sunday Times Award for most improved borough and the Planning Award for the project Whitechapel Vision. In 2009, The National UAE covered Rabina’s work around dispelling myths and stereotypes about the Hijab and bringing Muslim and Non-Muslim women together. In 2009, Rabina was shortlisted for the European Muslim Woman of Influence Award and in 2014, she won the Hero of the Year at the European Diversity Awards. In May 2009, Rabina was part of a delegation to Bangladesh, organised by the British Government’s Foreign Office as part of their Counter Terrorism strategy.

Rabina is married with three children, proudly working-class. Rabina’s memoir, My Hair is Pink Under This Veil was published by Biteback in May, 2021. The book tells the story of how a Muslim woman reconciles her faith with British culture against a backdrop of blame, bias, ignorance and misogyny, including from her own community. It will challenge outdated views about Muslim women and explore misconceptions regarding Islam, inequality and integration at a time when Britain faces its own issues with radicalisation, extremism and political divisions. 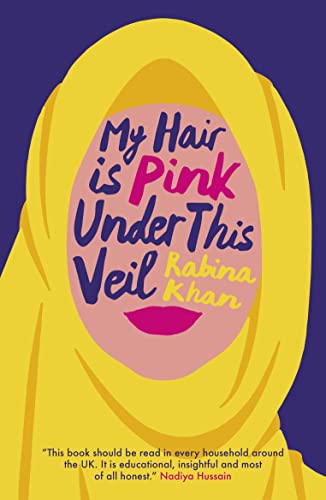