Everyone’s favourite spider returns in Milton The Megastar, Out Now!

Milton the Megastar is out NOW by the magnificent Emma Read! In the sequel to Times Best Children’s Book of the year 2019, Milton the Mighty, Milton the false widow spider sensation goes international!

Milton’s superstardom is stressing him out: the events, the glamour, the adoring fans! Secretly, Zoe, Audrey and Ralph think he’s turned into ... well ... a bit of a diva. So when Dad and Greta plan a trip to Hawaii, Zoe knows she has to take her best spider pals along for the ride: they all need a break. But with a live volcano, an endangered spider species, an unscrupulous entrepreneur and Milton’s ego to contend with, this is hardly a holiday ...

See below for an exclusive Q&A with Emma:

1. When did you know you wanted to write for children?

I’ve always written, but before I had children I never realised that my natural style was for young readers. It was re-reading Dahl with my daughter that inspired me to have a play around with a few ideas and I found myself feeling right at home – I was hooked and now I can’t imagine being without it.

2. What made you come up with the spider sensation that is Milton?

The character of Milton was inspired by real UK newspaper headlines, wrongly branding false widow spiders dangerous. Once I’d given him a name he just appeared in my head, with all his quirks and neuroses. Despite being a spider, I fell in love with him immediately!

3. If Milton could travel anywhere- where do you think he would like to go?

He would have high aspirations – he likes to think of himself as an adventurer and an intellectual, but deep down he’s happiest at home with his friends and family. He does love a good web-swing though, so I think he’d enjoy a trip to Madagascar to meet a Darwin’s bark spider, who spin the world’s largest webs.

4. Have you ever wanted a pet spider?

Ha! Three-year’s-ago me would be shuddering at the very thought! I still don’t think I’d cope with having a tarantula in the house but I would like a little jumping spider – they’re very cute.

5. What should readers be looking forward to most in this amazing sequel?

Readers of Milton the Mighty will hopefully enjoy being back with the eight-legged gang – Milton, Audrey and Ralph and their favourite bug-loving human, Zoe. But they’ll also be meeting some great new characters, including a walking environmental-disaster of a villain and a chorus of singing spiders ... and a certain adventuring spider from book one.

There’s also an amazing new setting which will bring the summer sunshine into our homes – there will be beautiful beaches and radiant rainforest, but also a very volatile volcano!

6. When you write, do you come up with your character or plot first?

I usually come up with a premise or a setting first, which often develops out of little more than a feeling or emotion. Then I populate it with characters – so, for example, I’d think ‘here’s a tricky situation – who shall I throw into the deep end of it!’ After that, I form a very basic four-act structure by jotting down all my ideas (random or otherwise) in blocks of ‘beginning’, ‘middle’ (either before or after the midpoint) and ‘end’. This eventually settles into something resembling a plot!

Make sure your characters have ‘agency’ – memorable books have protagonists, and antagonists, who drive the story by their actions. The consequences of decisions your characters make are what form the plot and move the narrative forward with pace and energy.

8. How can authors know what age range suits their style of writing best?

A simple answer is to read widely within children’s literature. This will help you find authors who write with a similar ‘voice’ to you. Also, children’s books are brilliant, so I would recommend this for anyone! Another tip is to find writers like you for support and advice, join a reading group or critique group and get a feeling for what others are writing. And if you can, find beta readers from your target reader age and ask them what they think.

9. Any tips for authors wondering how to get an agent?

Always, always check the submission requirements of each agent and follow them! So if they ask for three chapters, don’t send the first 50 pages. Personalise your cover letter and explain why you have chosen that specific agent to query and finally, make sure you really are ready to query – your story should be complete, edited, and preferably have been read by someone who can give you honest feedback.

10. In three words, how would you describe Milton the Megastar? 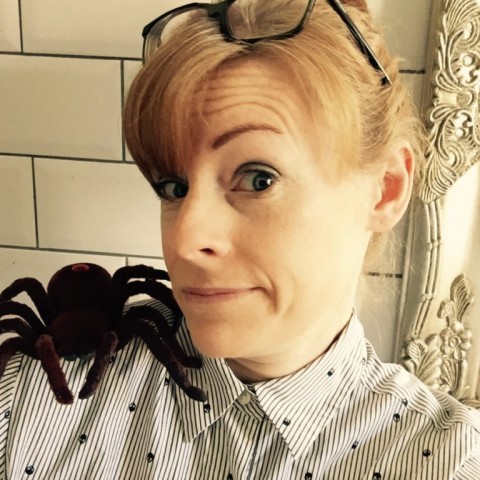 Emma was once a very sensible biologist. Now she uses her transferable talents such as attention to detail, patience and fine motor skills, to…