Jools Walker - aka LadyVelo is a freelance writer, best-selling author, podcaster and social media creative. On the side, she is a voiceover artist and presenter with experience in television (live and pre-recorded), radio (BBC Radio 4 - Saturday Live, BBC Radio 6 Music - Lauren Laverne, and BBC Radio London - Robert Elms and Jo Good) and she has also hosted large scale live events.

Jools started her writing career in 2010 on her award-winning blog, Vélo City Girl. Since then, she has published her first book (Back in the Frame) with Little, Brown and written for publications including The Guardian, Glorious Sport, Time Out London, Cycling UK, Grazia, and Refinery29.

Jools likes to write about a range of subjects, including (but not limited to): cycling, fashion, health and wellbeing, diversity and inclusion, and mental health.

Jools Walker re-discovered cycling aged twenty-eight after a ten-year absence from the saddle. When she started blogging about her cycle adventures under the alias Lady Vélo, a whole world was opened up to her. But it’s hard to find space in an industry not traditionally open to women - especially women of colour.

Shortly after getting back on two wheels, Jools was diagnosed with depression and then, in her early thirties, hit by a mini-stroke. Yet, through all of these punctures, one constant remained: Jools’ love of cycling.

In Back in the Frame Jools talks to the other female trailblazers who are disrupting the cycling narrative as well as telling the story of how she overcame her health problems, learned how to cycle her own path and even found a love of Lycra shorts along the way.

Jools’ first book, Back in the Frame, was published by Little, Brown imprint Sphere in May 2019. The audiobook, narrated by Jools, was released in December 2019.

Reviews for Back In The Frame:

“A joyful dose of inspiration that every cyclist, from rookie to randonneur, can take something valuable from”. — 4-Star review by Road.cc

“One of the best Cycling books of all time” —BookAuthority

LadyVelo
1:06 PM, Jun 21st (IST)
So, no nomination for Adventures in Coffee at the @britpodawards last night... but that didn't stop me posing for a… twitter.com/i/web/status/1…
Reply Retweet Favorite 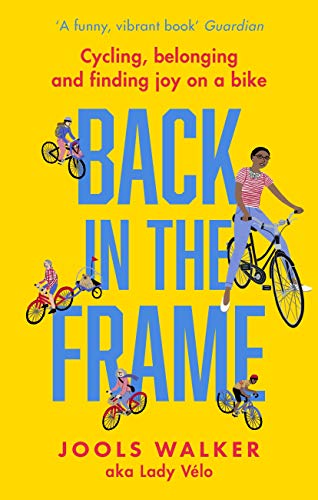