Rachael Chadwick has progressed from Teaching Assistant at a middle school in Dorset to Contract Coordinator for an energy company in London since graduating with an English Language degree from Cardiff University. Throughout her life, Rachael feels she has been stuck in a creative bubble ready to burst at any moment. She loves writing and many friends have encouraged her to start a blog for years.

In the spring of 2012, following on from a trip to Paris where Rachael scattered 60 postcards - in memory of, and as tribute to, her mother who died suddenly from cancer in February 2012 - asking people to respond if they found one, Rachael began to do what she truly loves and which, hopefully, helps others along the way, with the creation of her 60 Postcards blog.

Rachael’s first book, 60 Postcards - adapted from her blog of the same name - was published at the end of February 2014, with the paperback version published in February 2015.

60postcards
2:48 PM, Jan 10th (GMT)
RT @LondonSufc: Twitter,We’re only 38 followers away from reaching 4k! A mere unchallenging request, but one we would definitely love to…
Reply Retweet Favorite 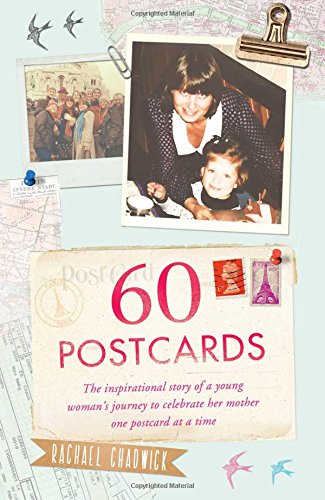